The Folly of the King’s Reader

"…and Jill came tumbling after," the court Reader concluded.

"Hang on a minute," King Jerald interjected, "that hasn’t been written yet, has it? This is medieval times after all."

"I wouldn’t know, sire," came the reply. "Would you like me to read another?" he said, taking a lung full of air in anticipation of reading another nursery rhyme from start to finish without pausing for breath.

"No I wouldn’t. I’ve heard all of these a thousand times, aren’t there any others that I haven’t heard?"

"But there’s thousands of books in the library. Surely I can’t have heard them all."

Just then a southerner entered the throne room, which was not an uncommon happenstance seeing as this was London and everything.

"Your majesty," he grovelled, "I have travelled many trillions of miles from the desolate wastelands of Edinburgh in order to present you with this."

And so saying, he handed the king a small piece of paper.

"I thought you were supposed to be a southerner," commented the King.

"It’s from your cousin, Jock," he added, helpfully, completely ignoring the King’s remark.

The messenger simpered out of the room, quietly singing ‘YMCA’ to himself.

"That whole genre of music hasn’t even been invented yet!" the King yelled. "Oh well. Court Reader, tell me what this says." He handed the paper to the Reader.

The Reader held it sideways on (which King Jerald didn’t notice, as he didn’t know how to read) and glared at it.

"Windsor? For crying out loud, this is medieval times, our second name isn’t Windsor, it’s…" he thought about this for a while, "What is my second name?"

"Y’ know, if you weren’t so damn good at reading I would have absolutely no use for you at all, Reader."

King Jerald sat on his throne idly looking at the pictures in a girly magazine (in blatant defiance of the fact that photographs hadn’t been invented yet) when a Scotsman entered the room.

"What, the one about you paying a visit?"

"Payin’ a visit? What are ye on abou’ man? A was warnin’ ye about an invasion, ye southern ponce."

"Oh, but the Court Reader told me…"

"The Cour’ Reader knows nowt, dude. Ye should have him hung, drawn and quartered, ye great panzy." And, with that said he collapsed to the floor, dead.

Somehow Jerald had neglected to notice the spear which had Impaled Jock through the chest, but now that he was dead there was no denying it’s presence.

"Reader!!" Jerald shouted so loud that he almost burst a lung.

The Court Reader slithered into the room.

"Why didn’t you tell me what the letter really said?"

Reader espied the crumpled mass of Jock dominating the room.

The King was hit with a sudden terrible realisation.

"Not as such, no." the Reader admitted.

"So how did you fool me for all these years?"

"I knew the stories, I just had to memorise what cover illustration went with what story."

"But this is medieval times, books don’t have cover illustrations yet."

King Nasty stood on the hill, overlooking the castle with his legion of loyal world conquering soldiers.

"Why hasn’t King Jerald, my younger twin, set up any defences? He definitely knows I’m coming."

"Errd, maybe he got him a new weapon, one which are invisible but im-pemetribble. Dur."

"By golly, you must be right!"

And he turned to his troops and issued the only order he could think of. 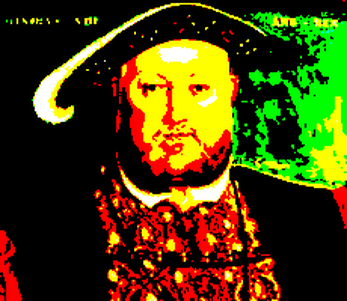